I’ve run into a couple issues, as well as changed the way I do a few things.  This is an ever evolving system, as I learn and make adjustments on how I do things.  I will keep updating my fodder system posts as I make changes, so keep on the lookout for those.

I have done a few experiments concerning oats, and they have all really been failures.  I tried adding an equal amount of oats to the chickens sprouts, the oats molded after just a day.  I rinsed them well every day and about half sprouted, but the seed itself continued to mold.  The chickens ate them, but I am not happy with feeding them moldy things so I won’t do that again.  I tried to just sprout oats by themselves, however, they molded and there was no growth.  I tried rinsing them in both cold and warm water, as I’d read that oats need the warmth, with no luck either way.  I will be calling the oats a failure for me, and won’t be messing with them again.

It got really cold here and the laundry room was colder then normal so I went to a 12 day sprout for the rabbits.  That has seemed to give me a better growth on things but I’m keeping an eye out for mold.  I had one problem with mold on my pea/wheat/barley blend when I let it go for an extra day, however I am attributing that to my decision to not water the last day sprouts.  I have returned to watering them and haven’t had any problems since.

I have nixed the peas in the mix completely.  I’m not at all happy with the growth on them, OR the growth of the barley and wheat when mixed with the peas.  I haven’t had any mold problems attributed to the peas, with the exception of that one time, just extremely pathetic growth.  I will crush and feed out the peas to my meat birds in the spring, as well as seed the yard with them to get rid of this bag.  I won’t be buying them again going forward.  I’m disappointed that the peas didn’t work out, they seemed like a really good idea.  The stuff I’ve read made them out to be a nice tender sprout with a crunchy treat at the end, which they were, but the growth I got out of them was really pathetic. The rabbits really liked them, they tended to eat those first, but with the mold issues and growth I just can’t justify them. I may try a few more experiments with them in the future, I do have over half a 50 lb bag left!

I am currently trying a mix of wheat and barley together for the rabbits.  It seems to be growing well for the chickens, so hopefully I will go back to seeing my original amazing growth on that mix.  If it dosn’t work, I will go back to switching between pure wheat and pure barley, I know that I get really good growth off those two grains separately.  I can do all barley one day and all wheat the next, then not have to worry about splitting pans or who got what yesterday.

I will be going up to three boxes a day for the rabbits soon, the little guys are starting to be not so little and are eating more every day.  I’d rather have too much of the fodder and compost it, then have too little and have them eating more hay.  I feel the live food is fresher and more nutrient dense then the hay is, plus it’s cheaper! I will have another litter on the ground soon as well and Mrs. Clause will be upping her intake to compensate.

If you looked at my fodder system pictures you might be thinking there isn’t enough room to add a third box a day.  You’d be right.  Blazed Monkey is making me a fodder rack.  He will be doing a post on the building of it soon, and after I get it up and running I will be posting pictures on another update post.

I’ve changed the way I’m draining the fodder as well.  I’m not happy with the holes on one end system.  I find that the water only runs along the bottom, and not in enough volume to get the top seeds wet on the off side.  Like so: 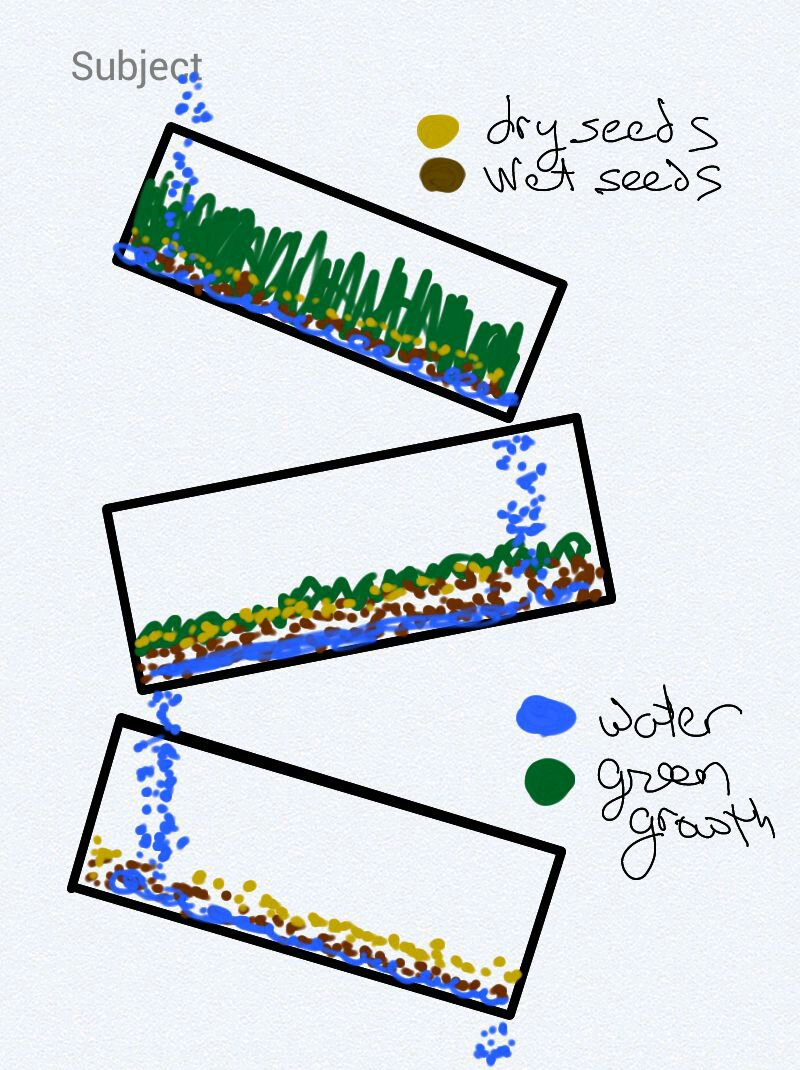 I am going to a drain straight down system, slowly.  I am taking the boxes I have and plugging the original holes I drilled with silicon caulk, then drilling new, slightly smaller holes along the middle.  I will post pictures in the future.  This should make it so the water runs sown and gets the whole seed bed wet. Like so:

I think dry seeds have been adding to my poor growth, so have been watering heavier on the bottom rows.  It has made a bit of difference, but I really think taking the peas out will make a bigger difference.  Going forward I will be changing those two things, and hopefully the straight down holes will help eliminate some of the  wet floor issues I’ve been having as well.

Overall, I’m very happy with the fodder, these are just some tweaks I am making to my system.