I’ve done a LOT of reading on growing fodder for about a year now.  I had intended on getting it set up to try just as the weather got cooler, however, life got in the way, as it often does.  We had some roofers put a new roof on my grandmothers house….which turned out to be a seriously frusterating experience.   Then a week later, my grandma died.  Its been a pretty rough fall.  I’ve been growing fodder for about two-three-ish months now, and I have to say, I am a convert.

Here is my system setup: 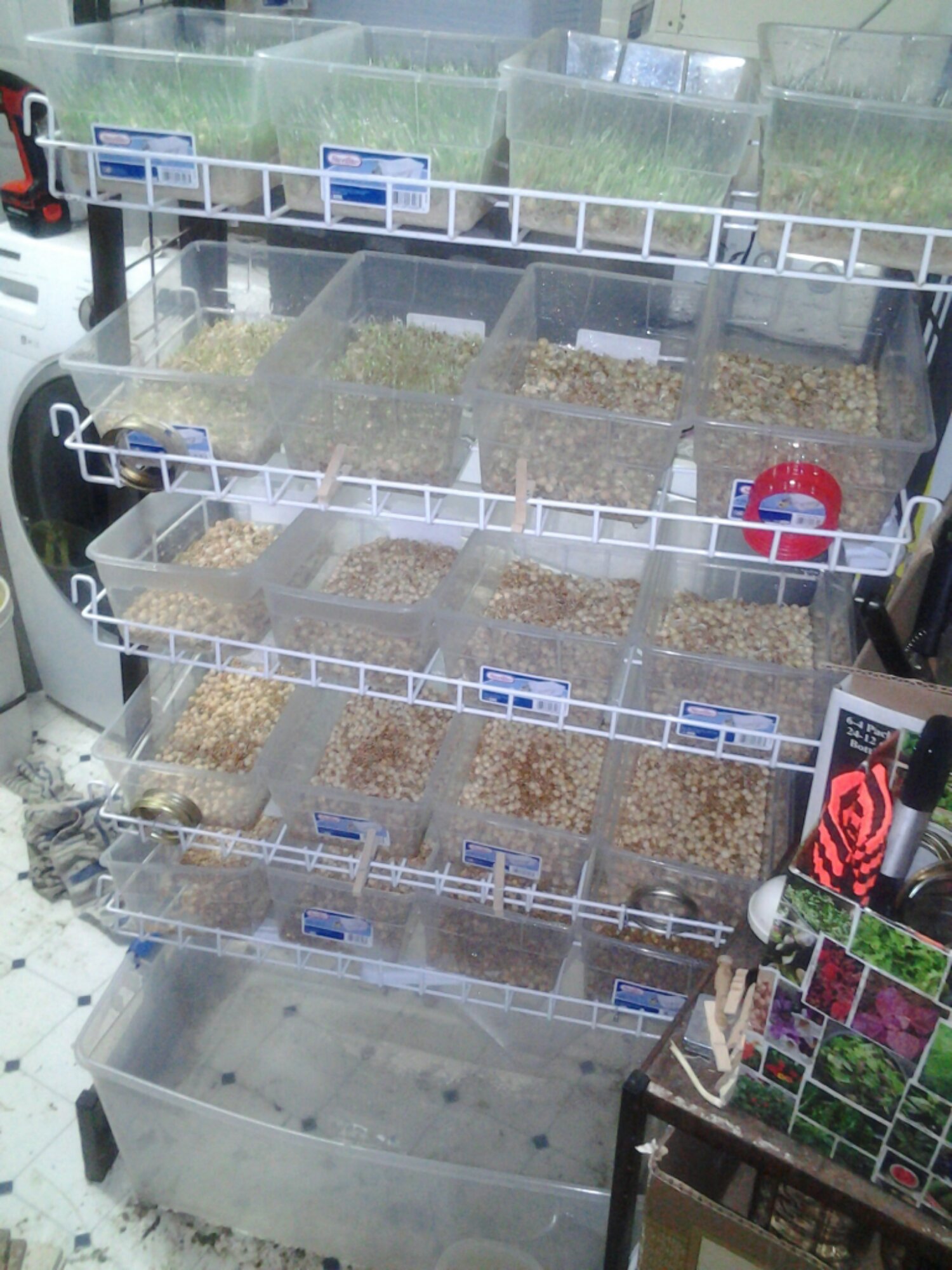 It’s set up in my laundry room, which is hard to take pictures in, due to the fact that there is a freezer sitting right where I should be standing for the best camera angle.  There is one more shelf on top there that you can’t see in the picture.  It has tomorrows fodder in it.  I take 11 days to gow out my fodder, some people take less time, but my house is fairly cold so it takes me 11 days.  Each shelf is tilted so the water runs into the shelf below, back and forth across the boxes.  There are holes in one side of the boxes for drainage, like so: 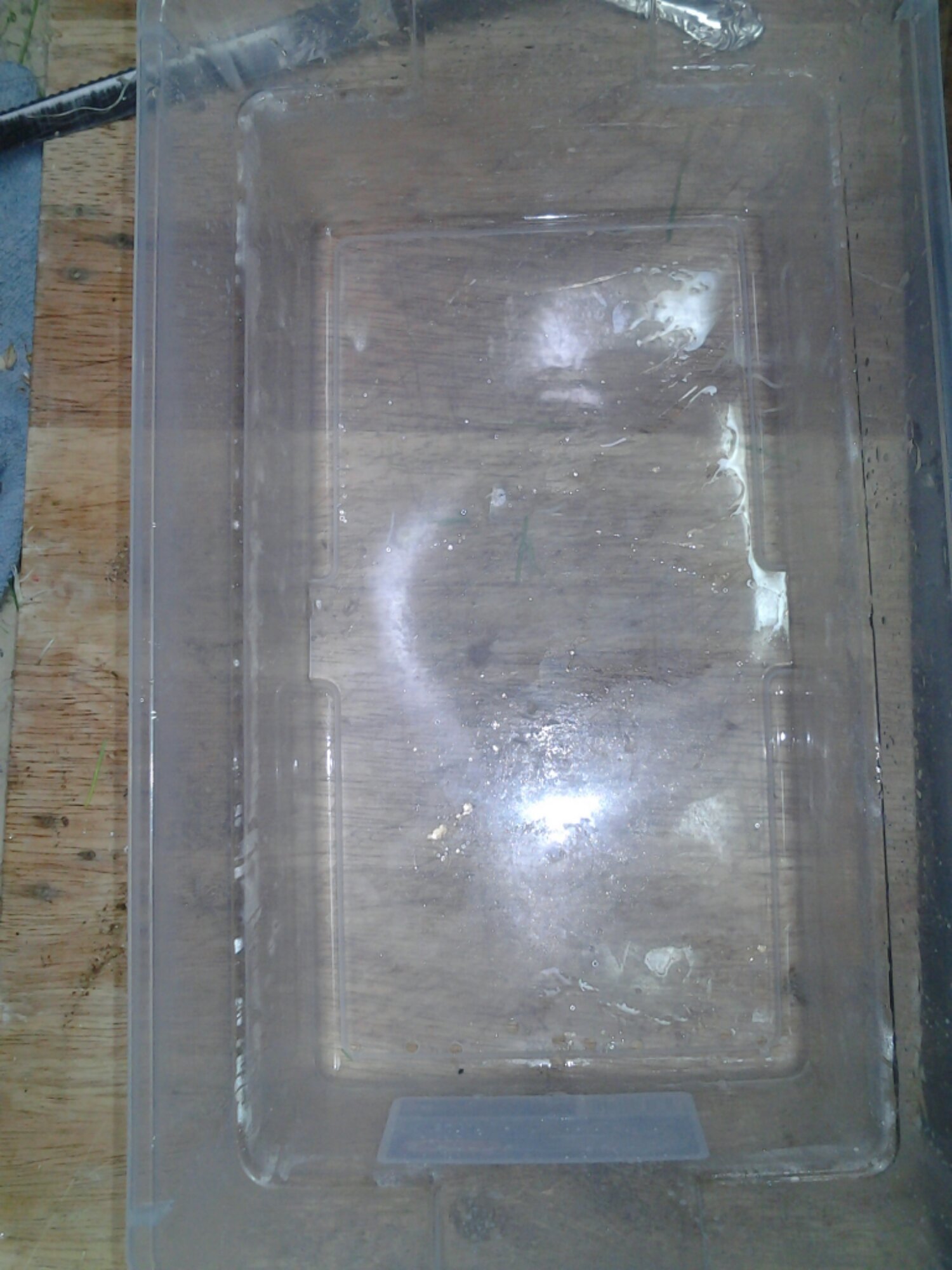 I got these boxes from Home Depot for 97 cents each.  They are your basic shoebox sized boxes.  They are also sold at Big Lots and Lowes for within pennies of the same price.  I recommend getting all your boxes from the same place, since each store varies slightly on the box shape.  The ones that I got from Big Lots were a bit rounder then the ones from Home Depot.  The rack set up is just cobbled together from stuff I had laying around here at home.  I am seriously thinking about building a rack out of PVC, however, just to get all the dementions right and facilitate drainage.  The wire racks sometimes hit the holes that are drilled into the boxes just right so they don’t drain perfecty into the box below, making a mess.  There is a big tub I got from Wal-Mart to catch the water below.  I don’t recirculate the water in my system, the bottom bucket is for catching water only.  You can set up a system with a pump to water it for you on a timer, I just haven’t since I have great results just watering once a day.  I use two gallons of water daily in my system.  I dump the water outside, so its not wasted by pouring it down the drain.

This is how I start: 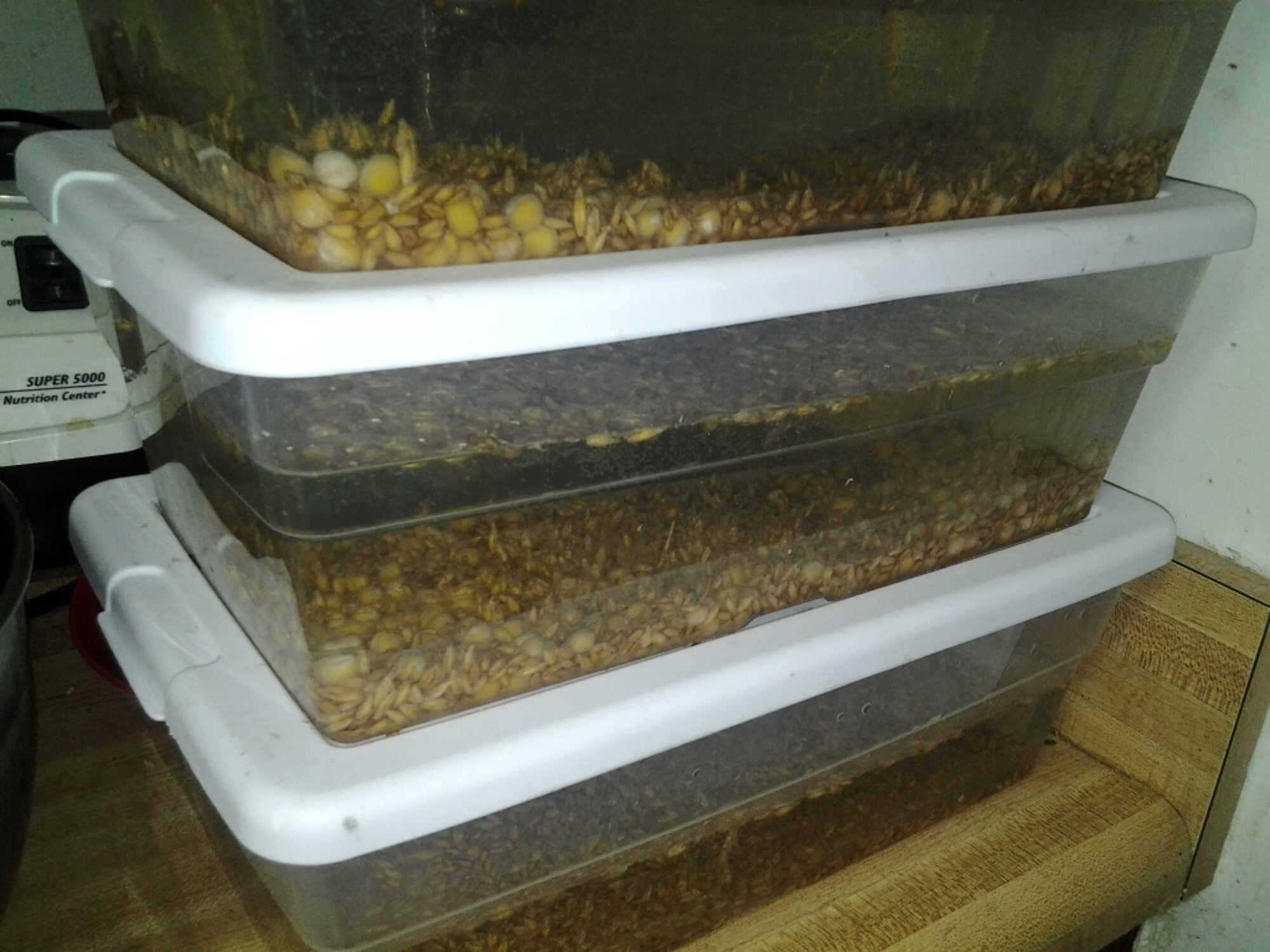 I do 2 boxes for the rabbits, and 1 box for the chickens.  The chickens system is set up slightly different then the rabbits, since I feed them more sprouts then fodder, and I will be discussing their system in my chicken feeding post.  The boxes contain 1/2 cup peas, 1/2 c wheat, 1/2 c barley.  I was sprouting each grain separately, however, I had a problem with the peas molding around day 9-10 as well as terribly slow growth, when I started doing them together the mold problem was eliminated,  however they still grow really slow compared to the wheat and barley.  I will be eliminating the peas when this bag is gone, the rabbits don’t like them dry, the chickens won’t eat them sprouted, and they mold too easily.  It’s just not worth the cost.  They are twice as expensive as the wheat and barley, and a much bigger pain in the ass.  I’m concerned they will lead to mold in my system again, so I am keeping a close eye on things.  I may try recirculating the water when I am out of peas and see how that works for me.  I probably won’t up the amount of wheat and barley to make up for the loss of the peas, they produce most of the mass of the fodder I am feeding out as it is.

I put my grain in the box, fill it with water, and let it set soaking for anywhere from 4-10 hours.  It’s usually around 6 or so hours that it soaks, but I really don’t make a big deal about how long it is in there.  I set it up in the morning, and drain and rinse them in a strainer in the evening when I am feeding the rabbits.  I don’t use any bleach or vinegar in the soak water,  some people do,  but I haven’t seen a need. 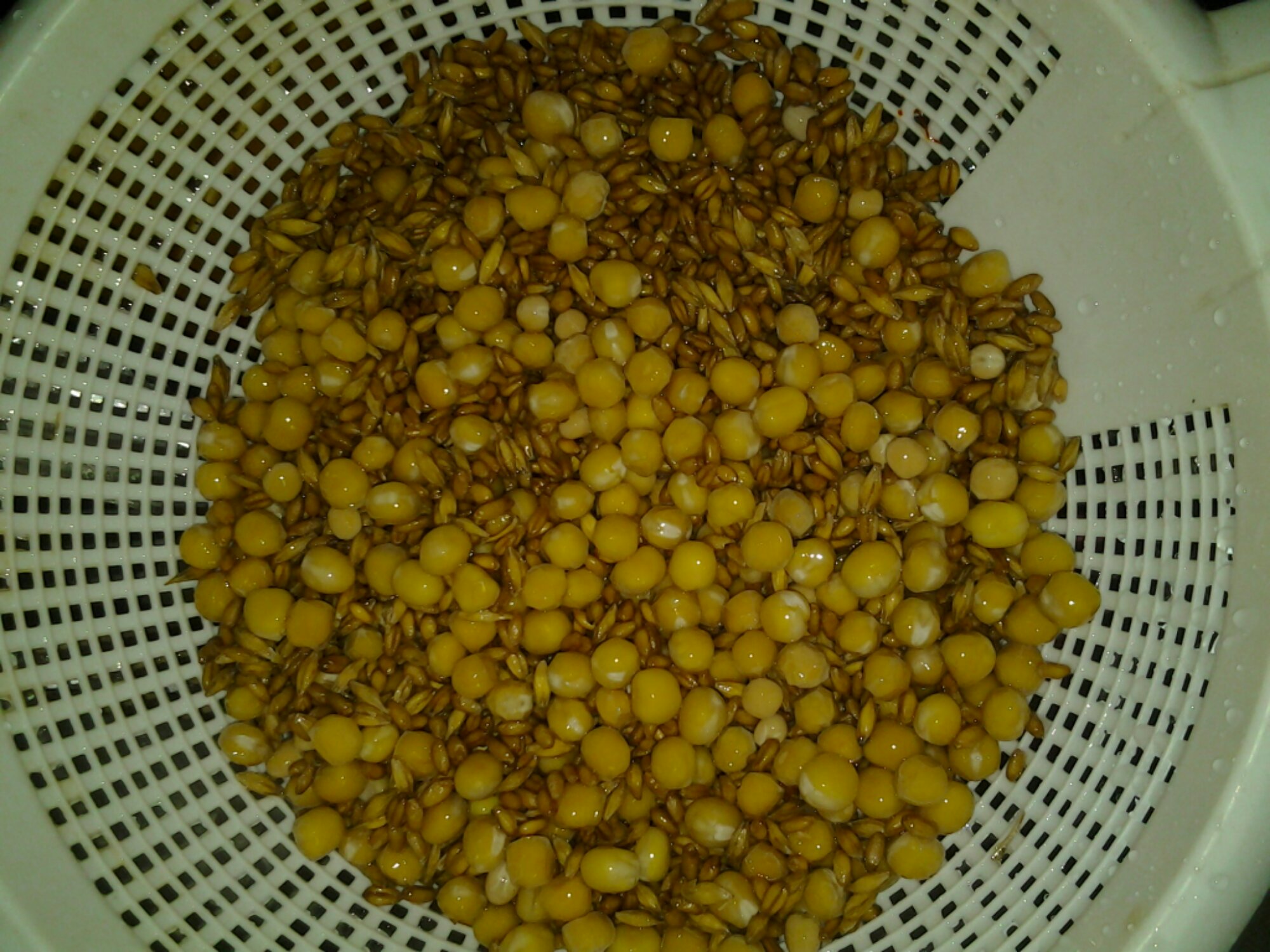 I make sure to rinse the grains really well at this stage.  It helps to prevent mold by getting rid of the chaff and dust that would cause thing to clog up.  The grains put off quite a bit of starch in this stage so rinsing it well helps the system to stay cleaner in the long run, also reducing your chances of mold.  From here they get put into one of the boxes with holes and then put in the bottom of my growing rack.  They move from the bottom to the top, over and up day by day. 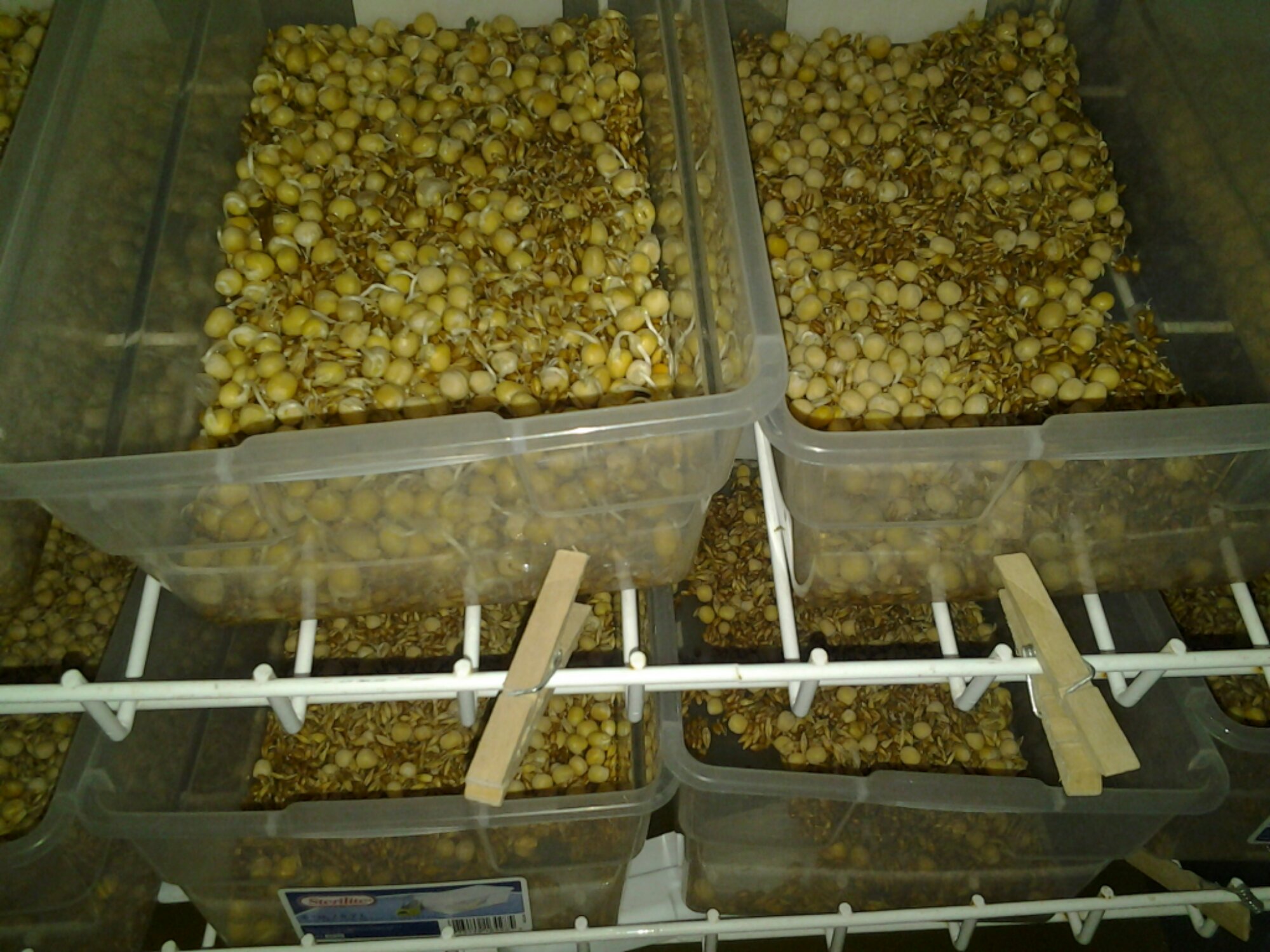 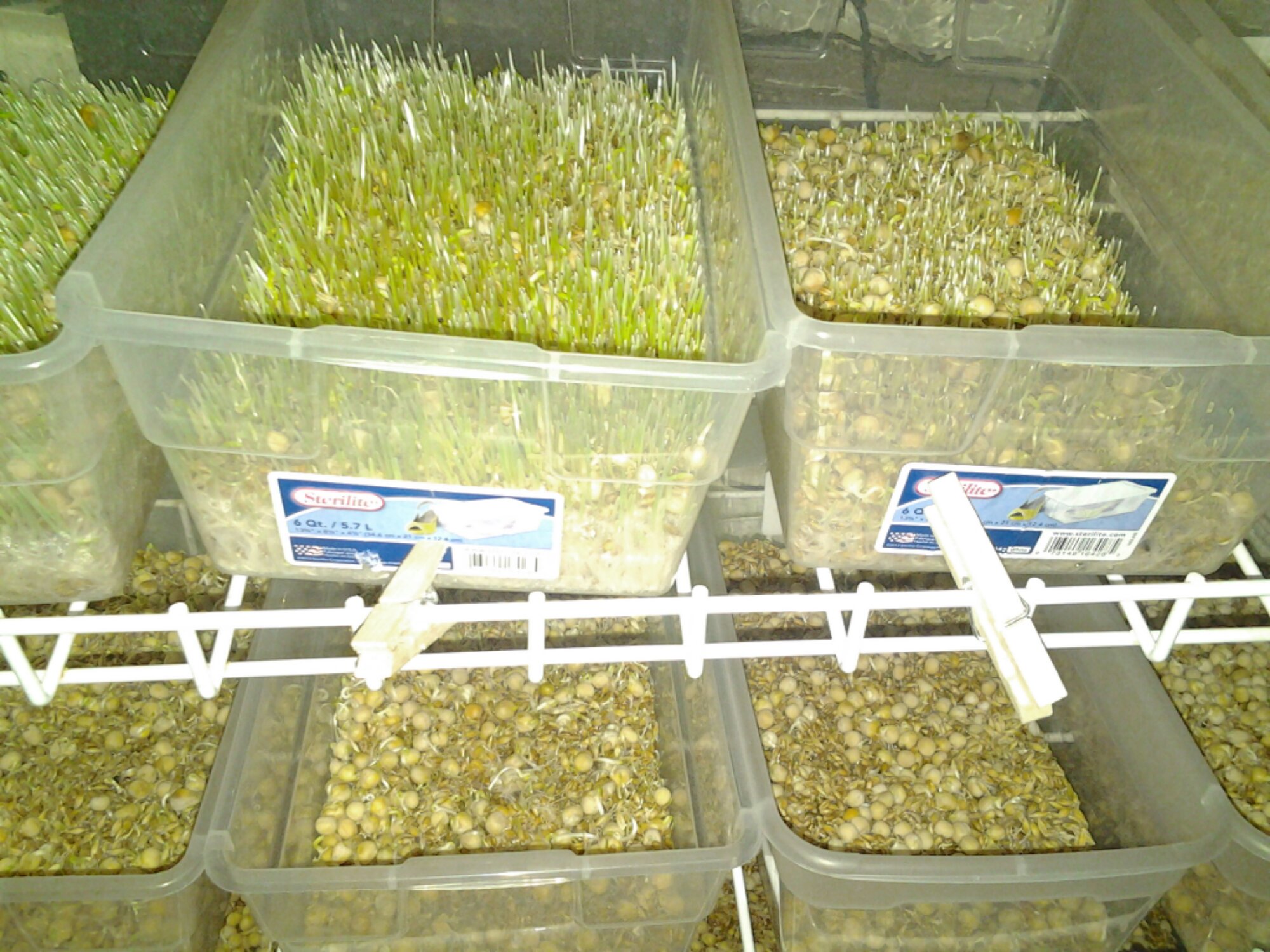 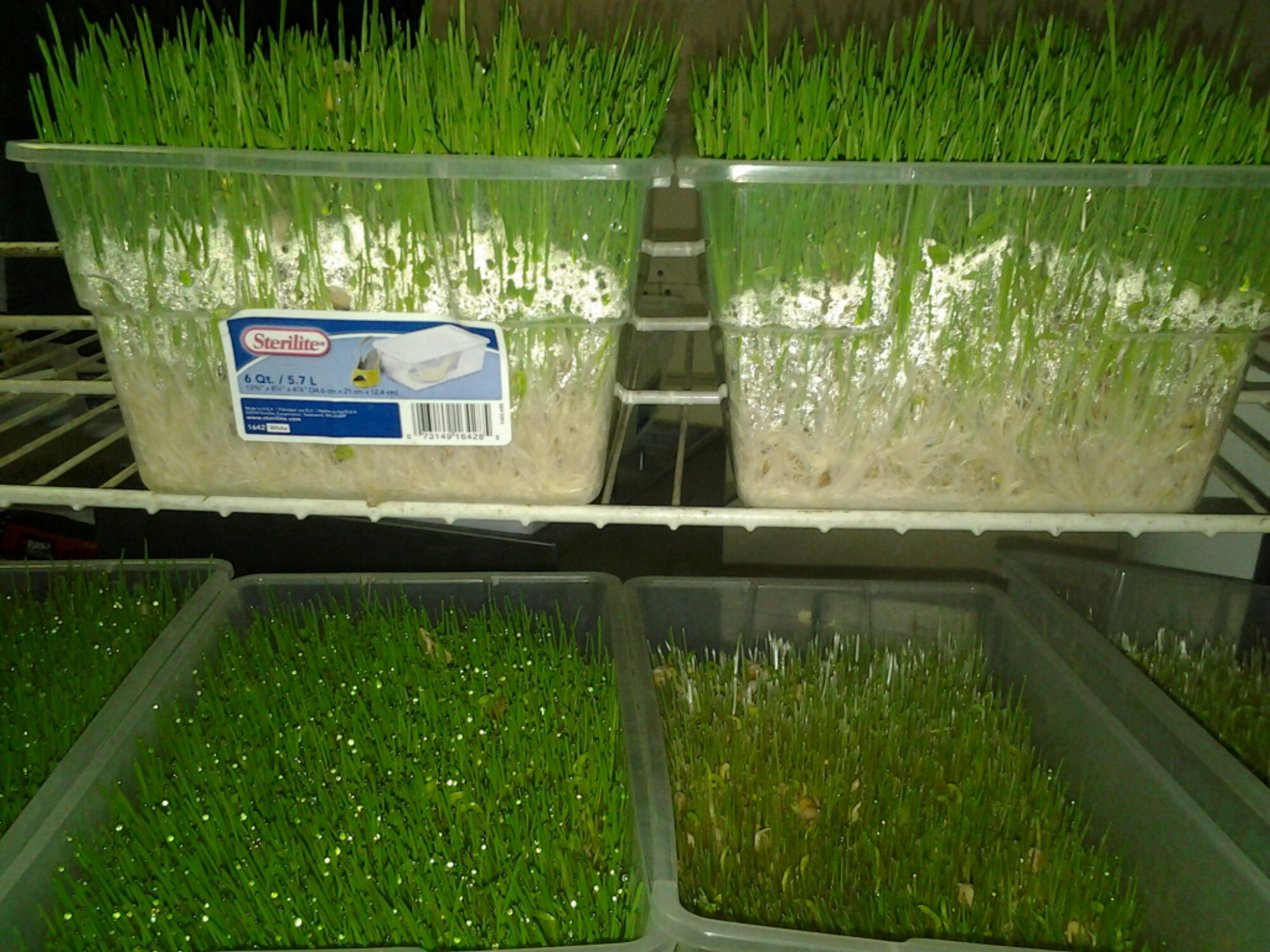 You can see there is a very dramatic greening up in the last half of the growth cycle compared to the first half.  They spend several days growing roots, then they put out the green sprouts. These grow under one two bulb florescent light fixture in the ceiling of my laundry room, there isnt any other lighting, and no windows.  I’ve tried putting them outside on the days that its nice out, but it seems to make absolutuly no difference in growth so I’ve stopped doing that.

Here is a picure of the mat of fodder taken out of the plastic shoe box: 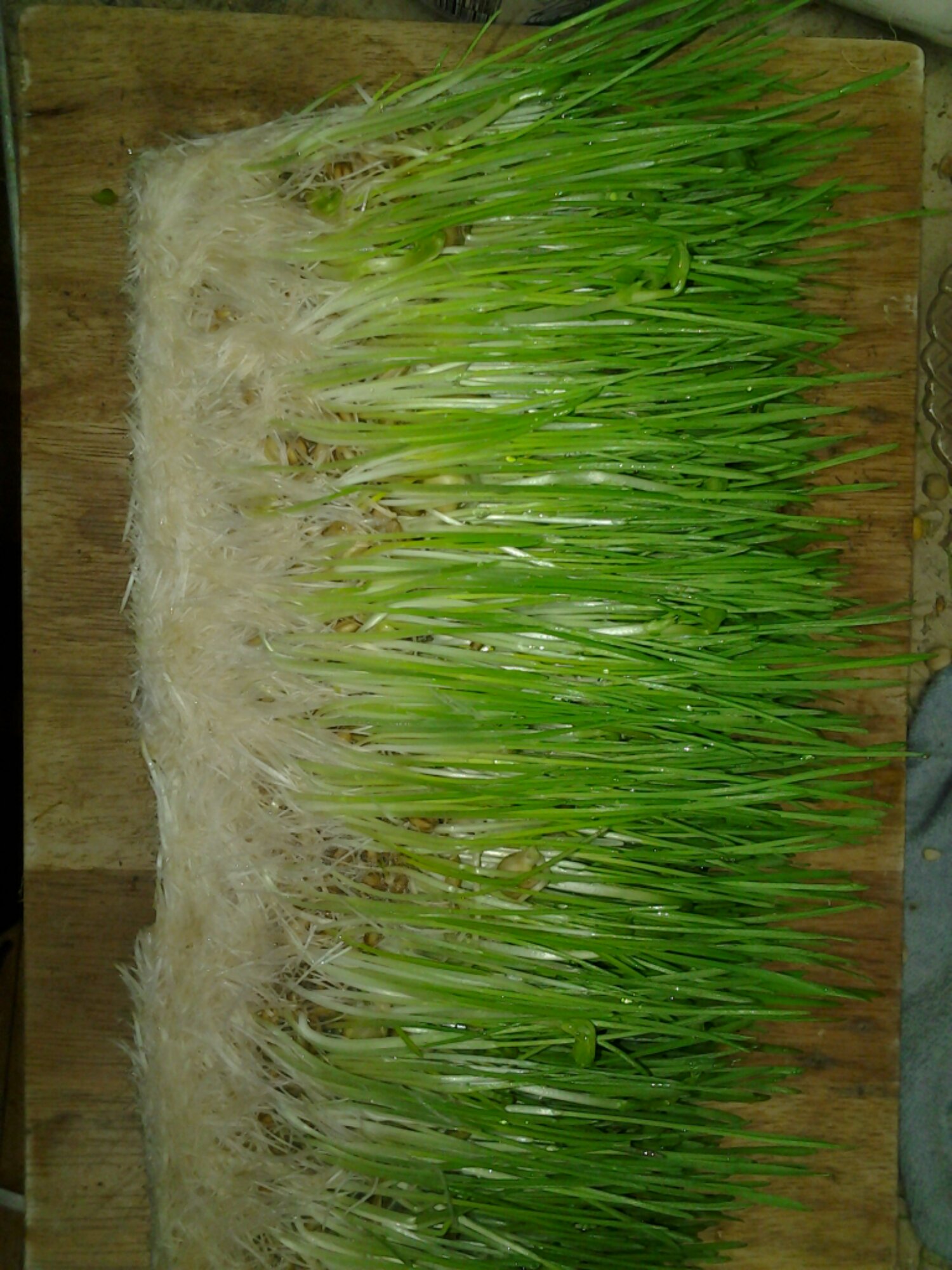 The mat of roots: 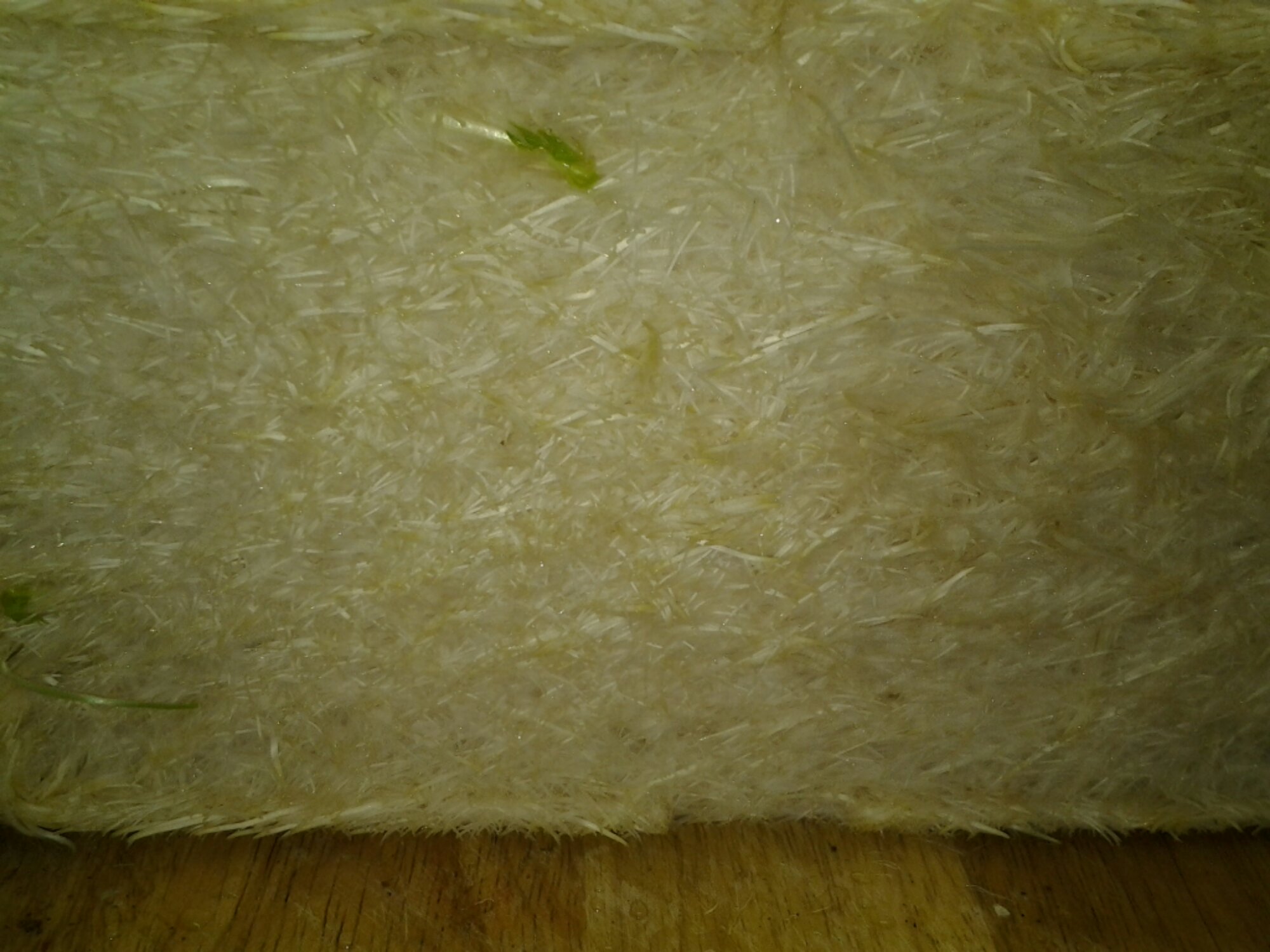 The peas are kinda weird, they grow wildly through out the mass.  Some even down, as you can see. Here it is from the top, you can see the pea shoots look different from the wheat and barley, which look similar: 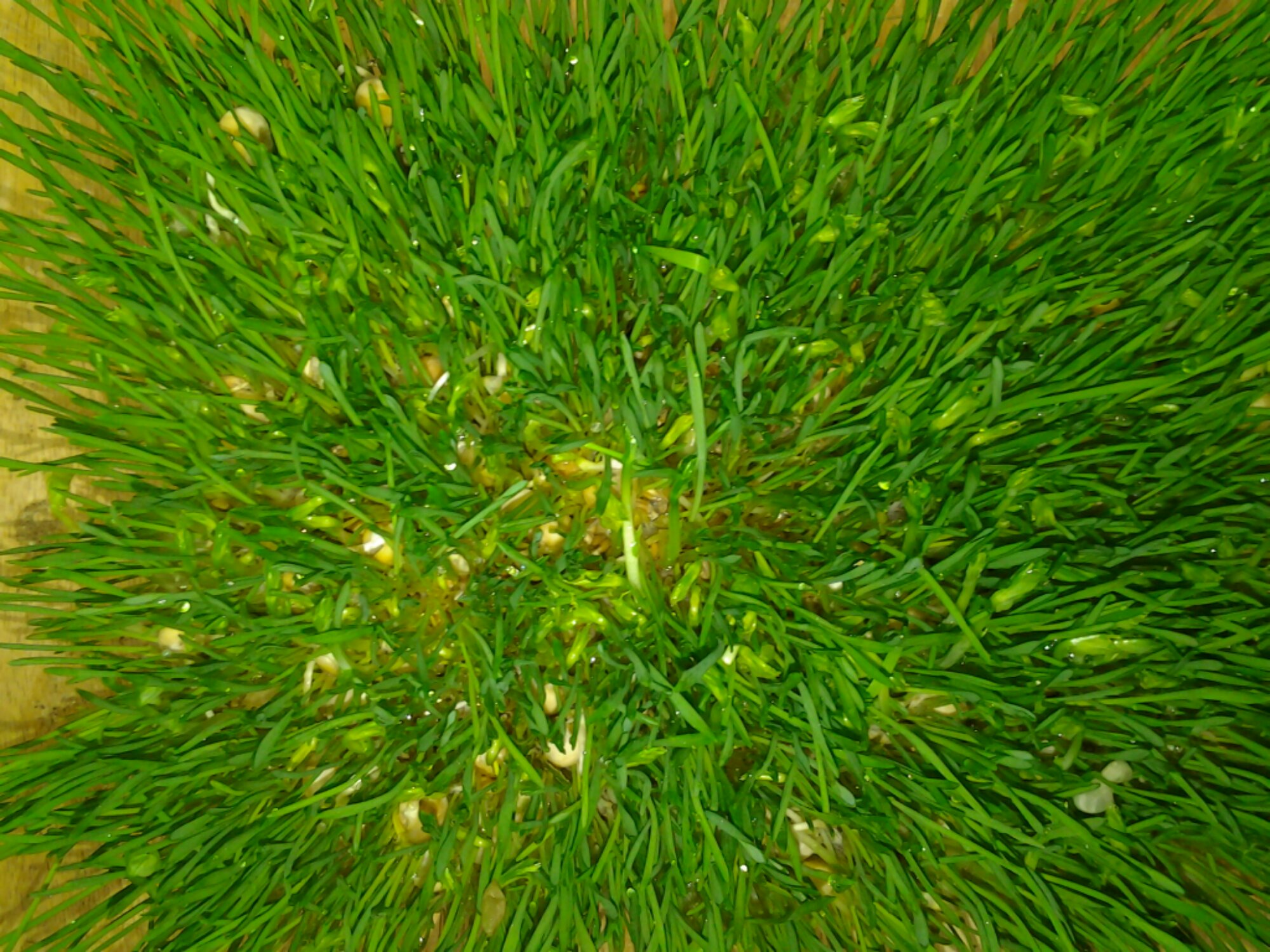 I feed this amount, roughly, per rabbit (normal sized pack of playing cards for size reference): 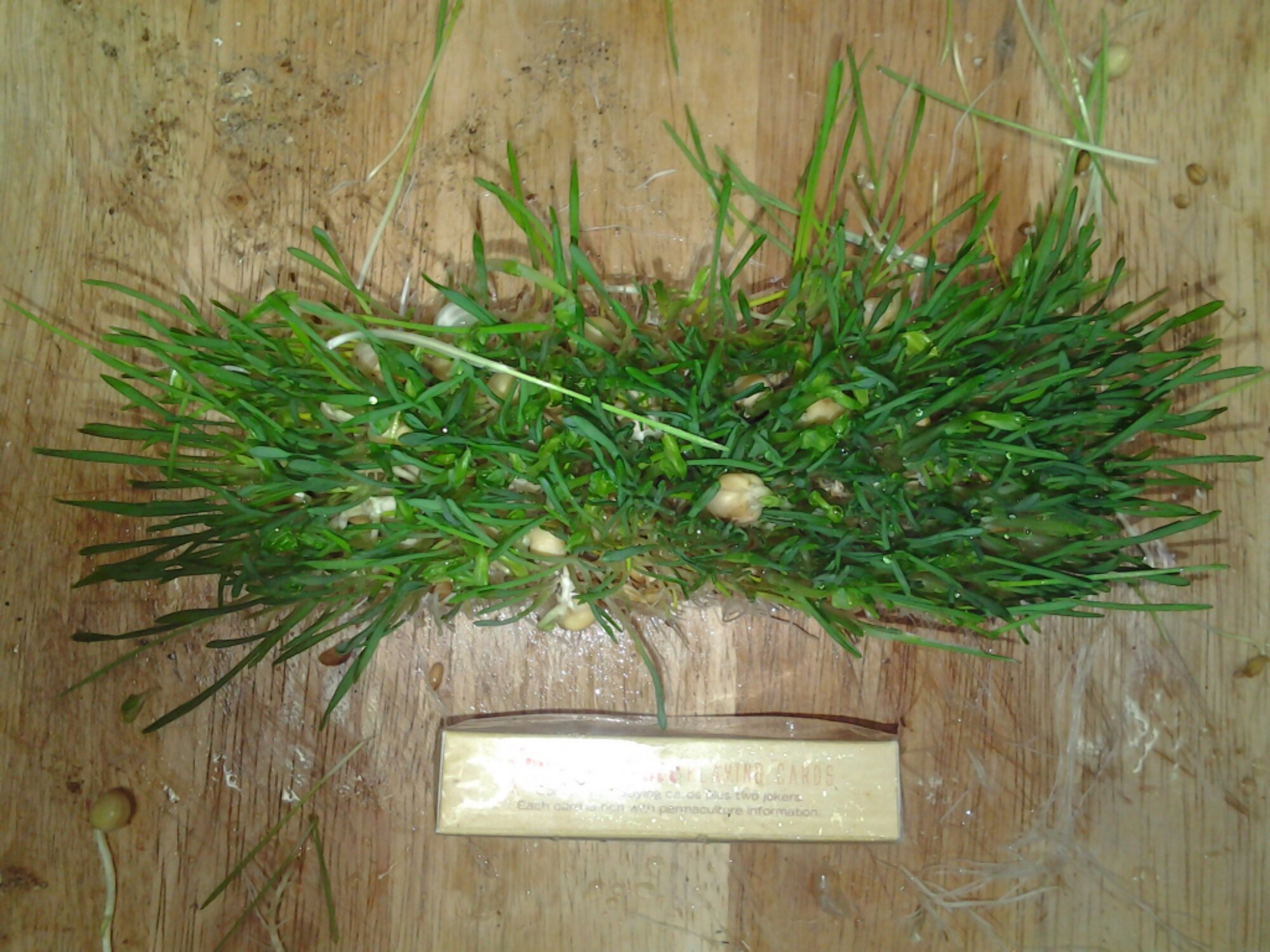 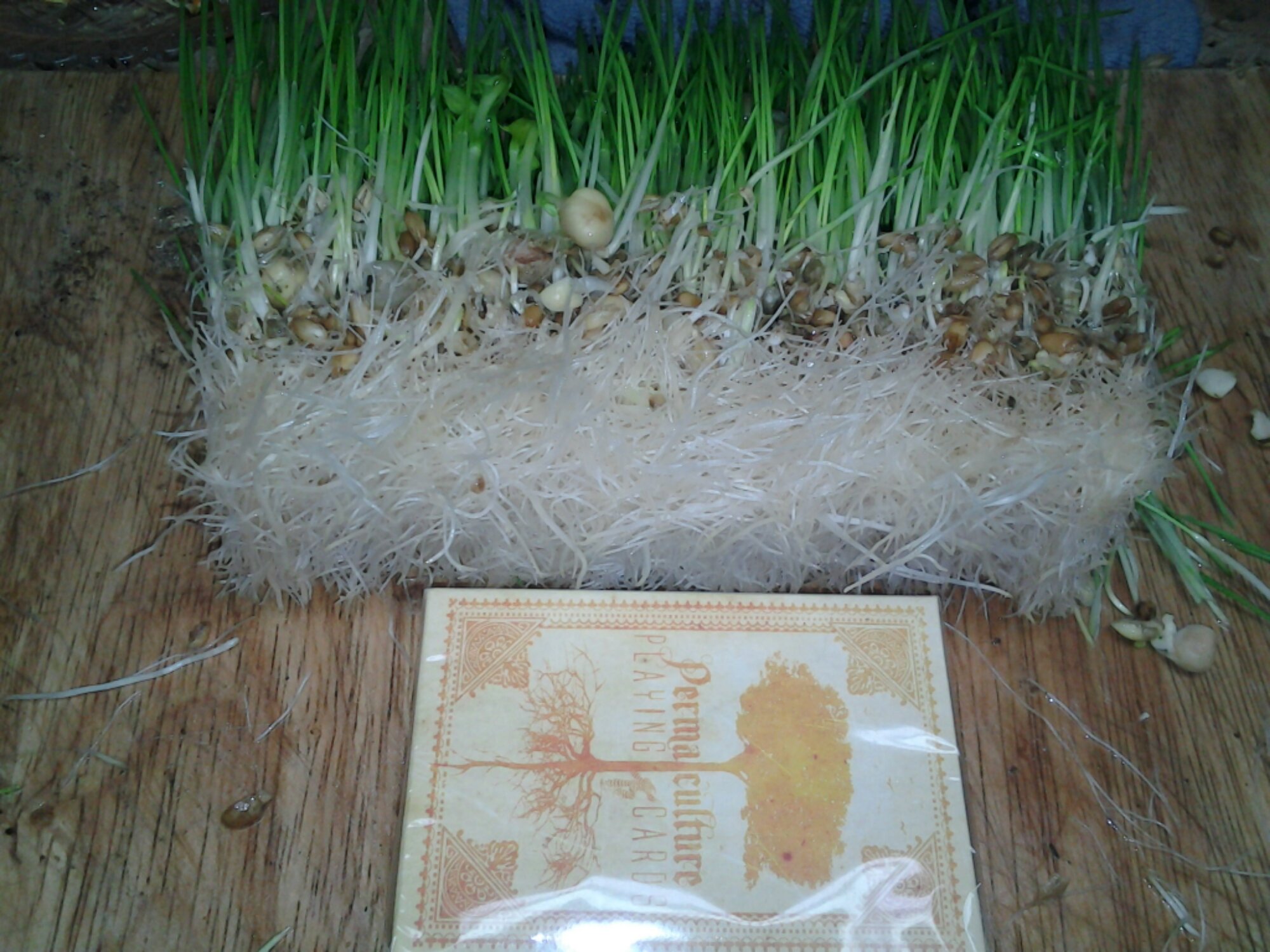 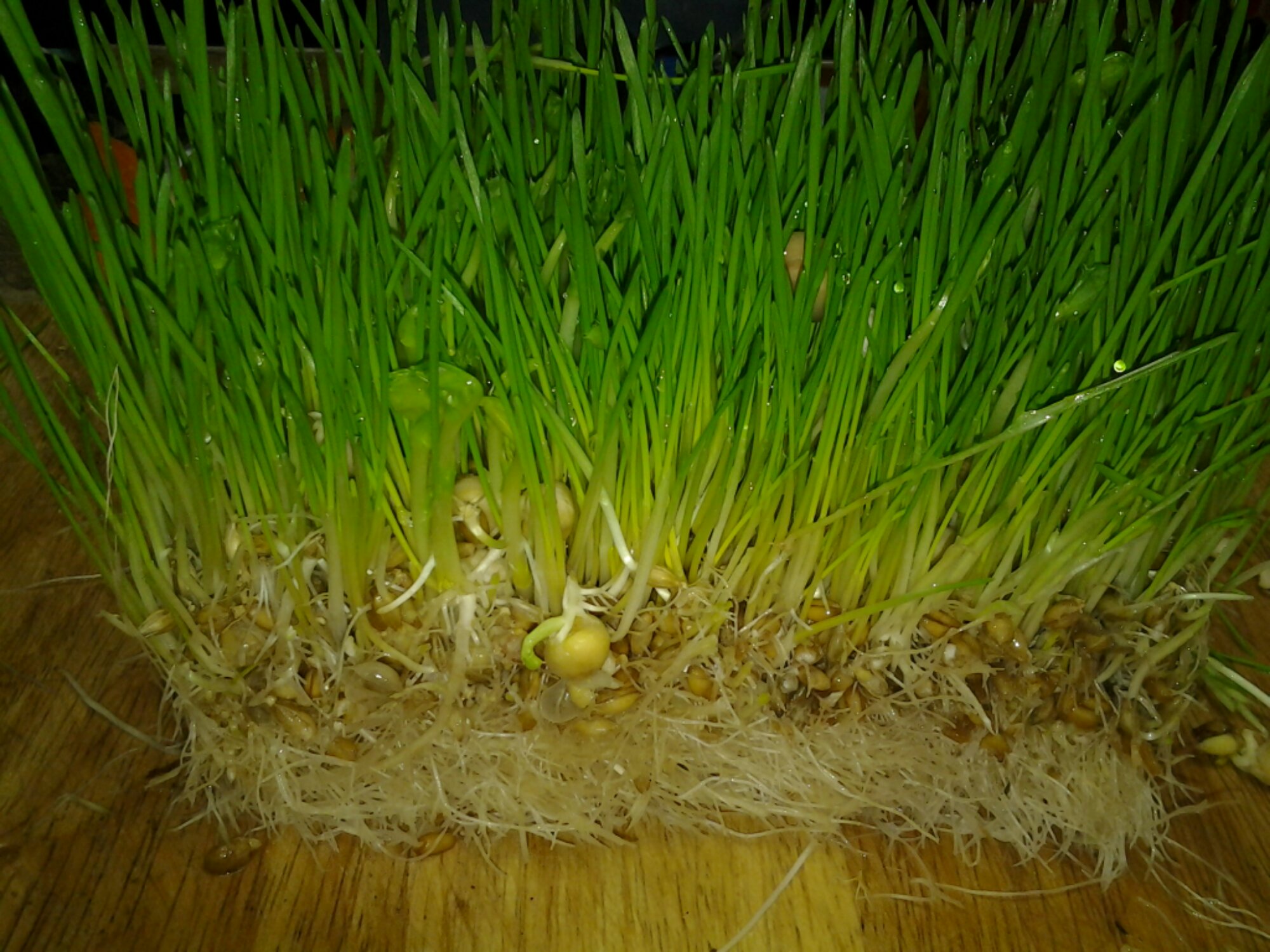 The dry weight of the grain I am putting into the each shoe box weighs 9.5 oz.  The fodder I am getting out weighs 3lbs 8 oz…..thats almost 6 times the weight of the dry grain!  I know there is alot of gain in moisture, however, there is a huge gain in avaliable nutrients as well.  This link is to a fodder thread on backyardchicken.com that has alot of growing information as well as nutrition information on fodder vs. dry grains as well.  Its geared toward chickens, but I put it to use for my rabbits. The current issue of Backwoods Home Magazine has a good article about growing fodder as well.  The author of that article has posted in the backyardchickens.com thread that I linked to.

Overall I am pleased with my fodder experiment.  I will be continuing to grow and feed out fodder to my rabbits in the future.  Just seeing how much they like it, and how good they look, is enough for me.  It dosn’t take me more then 10 minutes a day to do everything that needs to be done with my fodder system.  I’m sure I could figure out ways to automate it more and spend even less time on it.  There are some really awesome commercial systems out there for growing fodder, but they start over $1000 and just go up from there.  I have about $30 into my system right now, and that whole cost is from the boxes that I bought to grow in.  Everything else I had laying around the house.  I actually started my experiment in planter flats, like you see in commercial green houses, however, that just produced way more fodder then I needed.  It was taking me several days to get through one flat of feed.  Two of the shoe boxes seem to be perfect for my needs at this time.

The barley seems to be harder to find for some people then the wheat does.  I can say that in my experience the wheat and the barley both seem to grow at the same rate, with the same ease, and are loved by the rabbits equally.  I haven’t tried oats, everything I’ve read seems to point to them being really hard to get to sprout, and easily mold.  I may do an experiement with them in the future, just to see for myself, but for now wheat and barley seem to be the way to go.