‘Tis the season for seeds!  I got my first seed catalog in the mail just last week: 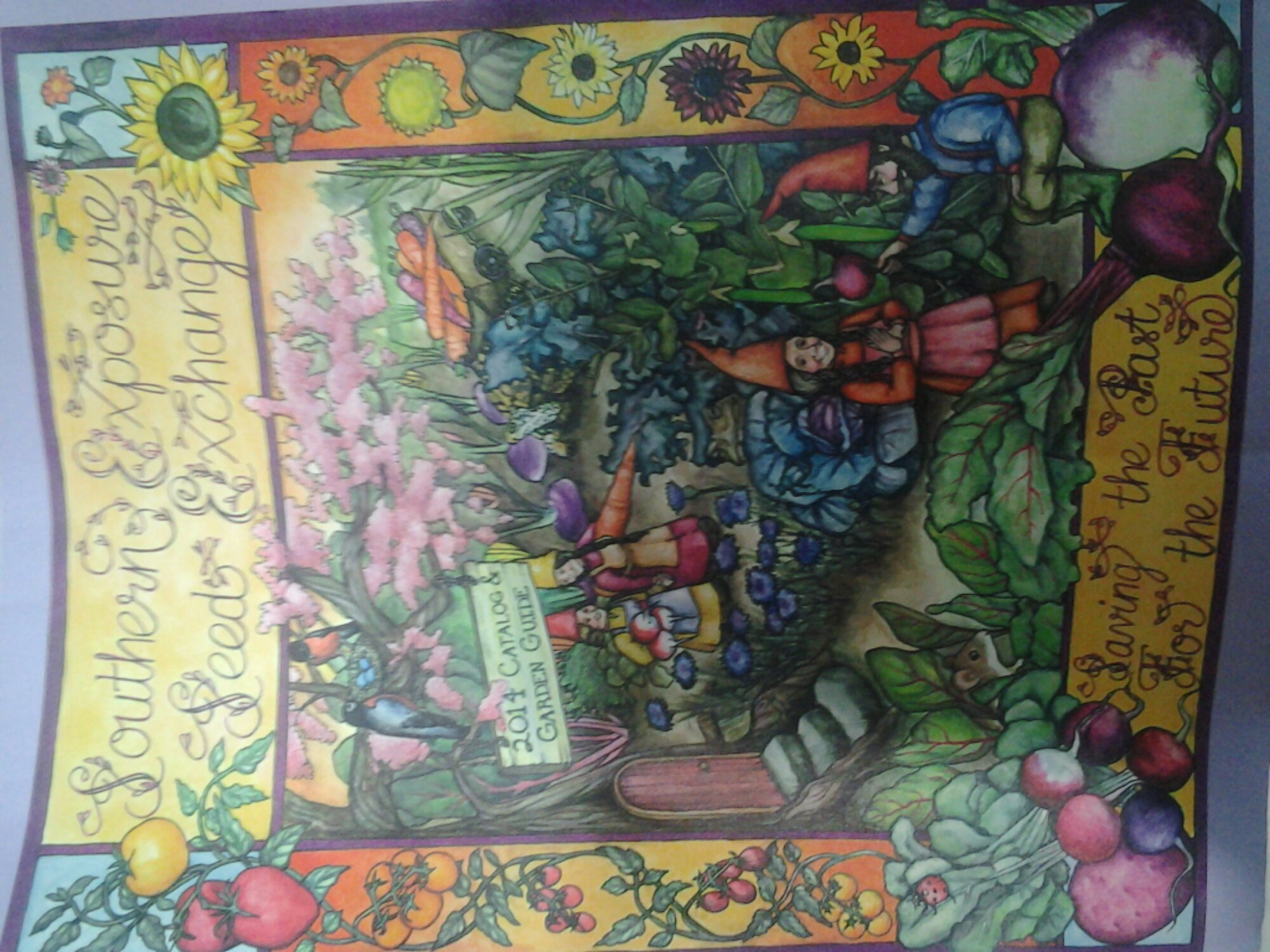 I am pretty sure that this is the same catalog I get first every year.  They seem to have the biggest variety of seeds from what I’ve seen and I always end up putting some kind of order in with them.  This year I ordered 4 different types of sweet potato slips for delivery this spring, some potato onions and perennial leeks for delivery this fall, and a few packets of seeds that I thought I needed.

I really should learn to go through my seeds first before ordering new ones: 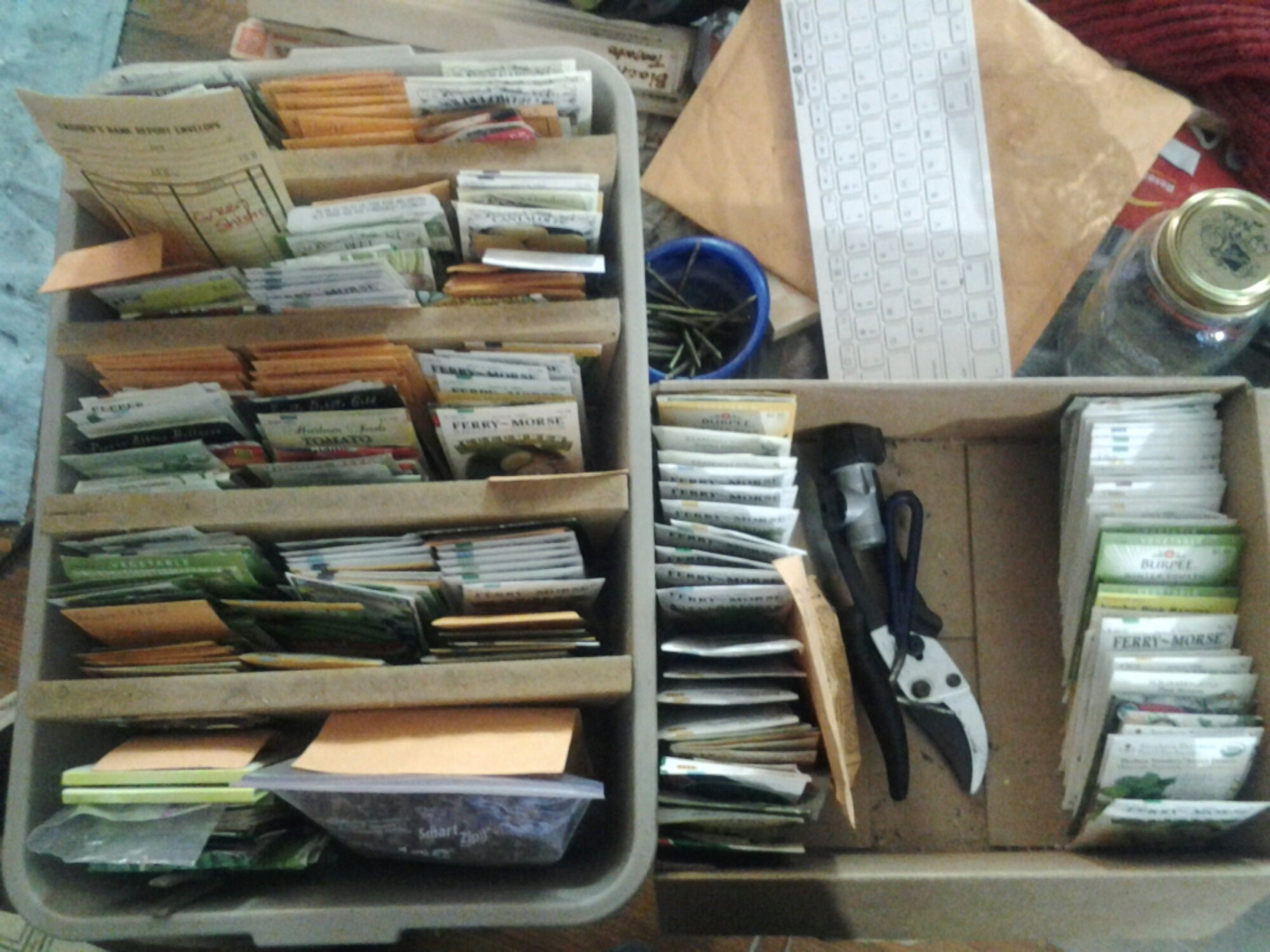 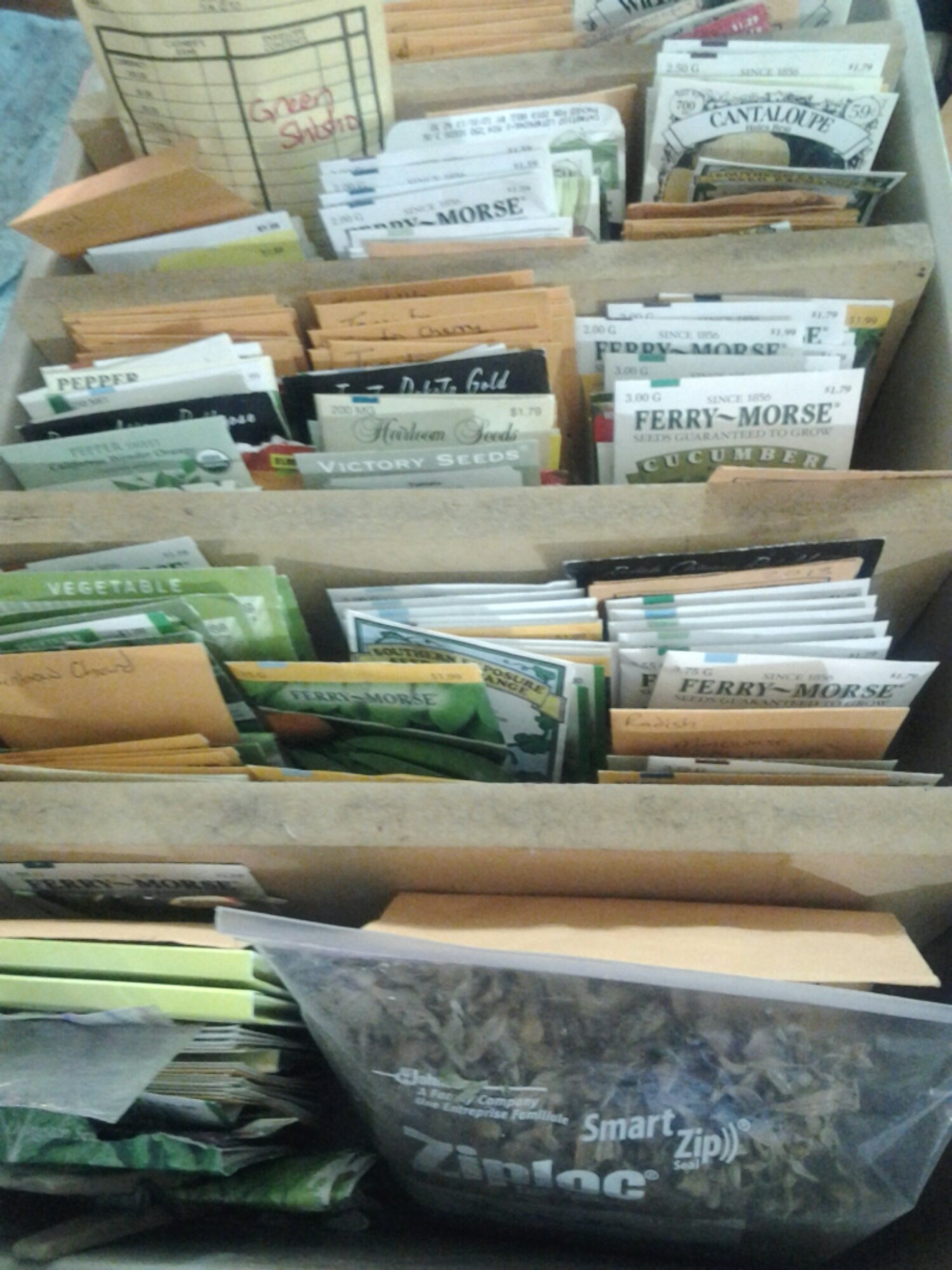 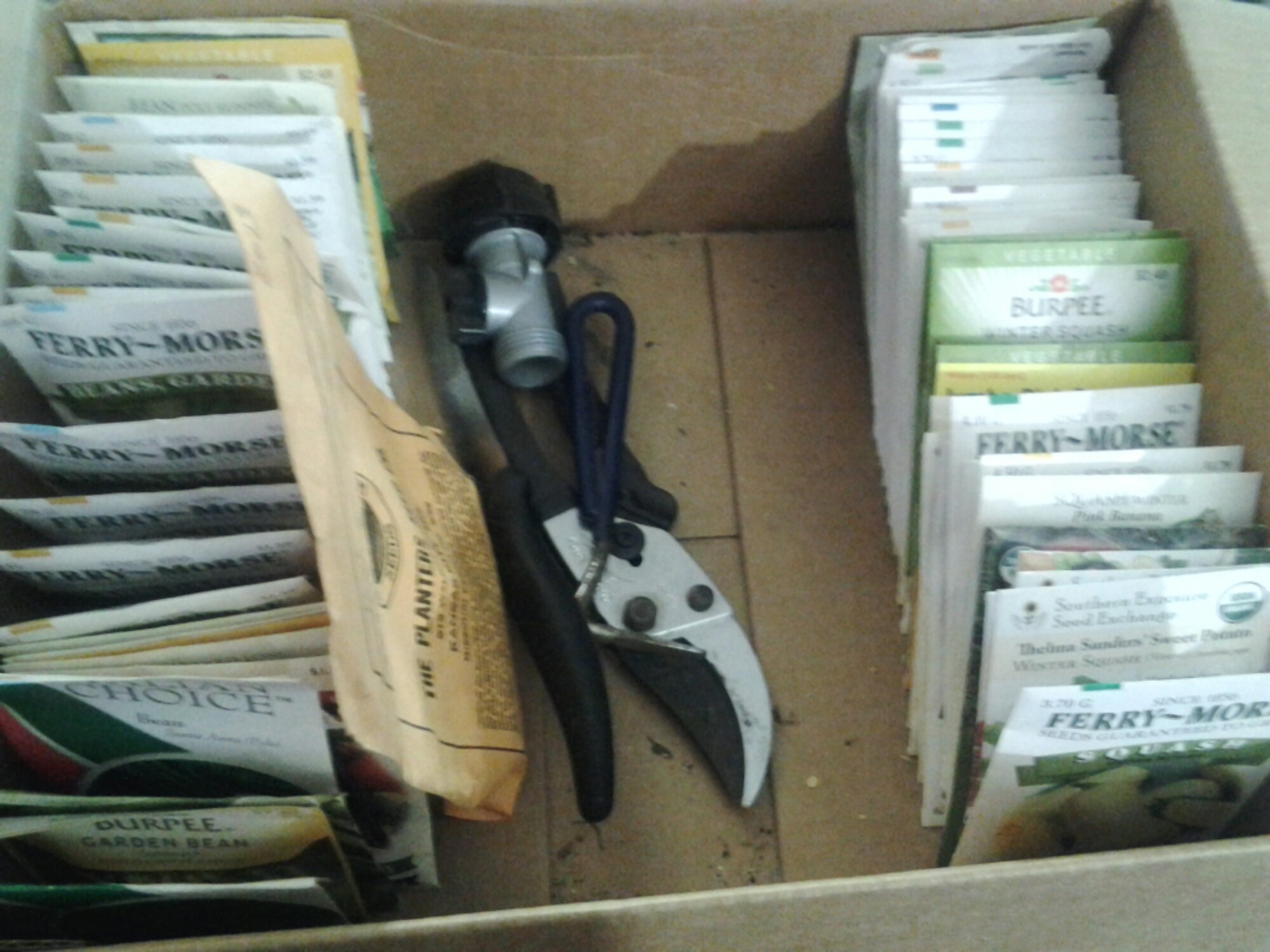 Especially since it seems like I have a few seeds….

Today was go through your seeds day.  I tend to buy seeds that I find interesting all throughout the year, not just in the spring.  I haunt the seed sellers locally at the end of the year for their clearance sales, which is the reason I have so any different kinds of seeds.  I managed to get to Planters Seed and Feed as they put their seeds on clearance for $.50 a packet, then ended up at Habitat Restore several weeks later and found they had clearance seeds at $.25 a packet!  Of course I stocked up.  When seed packets run from $1.00 up to $5.00 a pack I just can’t see not stocking up when I get the chance.  I also ended up picking up some of the more unusual seeds from the Mother Earth News Fair this year,  mostly herbs.  There were quite a few seed companies there and they had their seeds priced under for various amounts under retail.

I’ve been growing a garden long enough now to realize that seeds aren’t just good for the year that they’re sold in.  I have had excellent luck sprouting seeds that are many years old.  The only thing I buy fresh every year is Lettuce seeds.  I have had zero germination on lettuce that I’ve stored for more then one year.

The order I put in for Southern Exposure Seed Exchange I ended up duplicating a few of the seeds I already had, both cucumbers.  I also put in a small order from Victory Seed Company, they give a discount to The Survival Podcast Members Support Brigade members, of which I am one.  I’ve been impressed so far with their communications and fast shipping, especially around the holiday season.  I will be ordering from them again, assuming their seeds have good germination….but I have no reason to believe they won’t.

I am sure I will be getting several more seed catalogs over the next month or so, and I’m sure I will put in at least one more order from one more company for seeds.  I just can’t help myself, I love to try new things.  It seems like every year there are a few more varieties on the market, some of which I just have to have!  I also realized as I was going through my seeds that I have only one kind of kale seed, Dinosaur Kale.  I want to pick up a few more kinds, and at least one that is super winter hardy.  I love having kale out in the garden all winter long to snack on.  I’m not exactly sure how I ended up with only one kind of kale, but you’d better belive I will be correcting that oversite!

I will be starting Tomato and Pepper seeds this week.  I have waited until the middle of February in the past and I just don’t feel like the peppers get a good enough start that late.  It seems like my peppers just aren’t quite getting ripe by the end of the season.  It could be that I am planting peppers that aren’t good for the region I’m in, however, I am going to try earlier seeding and see if that makes a difference.  I’m starting the tomatoes earlier as well because who dosn’t want earlier tomatoes???

We are going to be planting far more tomatoes then we ever have before because the tomatoes that we canned this year we’re So GOOD!!!  I just can’t get over the amazing flavor of the tomatoes.  I’ve used them in just about everything so far and haven’t come across anything that isn’t made better by the addition of home canned tomatoes.  My favorite so far is 1 qt tomatoes, 1/2 qt raw milk, in the crock pot.  Let it simmer on low most of the day then take a bit of fresh basil, I use about 2 fresh leaves (1/2 tsp or so dried), and mix it all until smooth with an immersion blender.  Amazing.  It looks a bit curdled before you whirl it together, but the flavor is amazing.  We’ve only canned tomatoes with salt this year, but if we have a bunch next year I want to try making some salsa and some rotel type tomatoes.  Maybe even some spaghetti sauce or ketchup.  It’s amazing what you can do with home canned tomatoes.

I saved as many seeds as I could this year.  It was one of my garden goals, and I managed to do pretty well.  I ordered some coin packets off amazon: 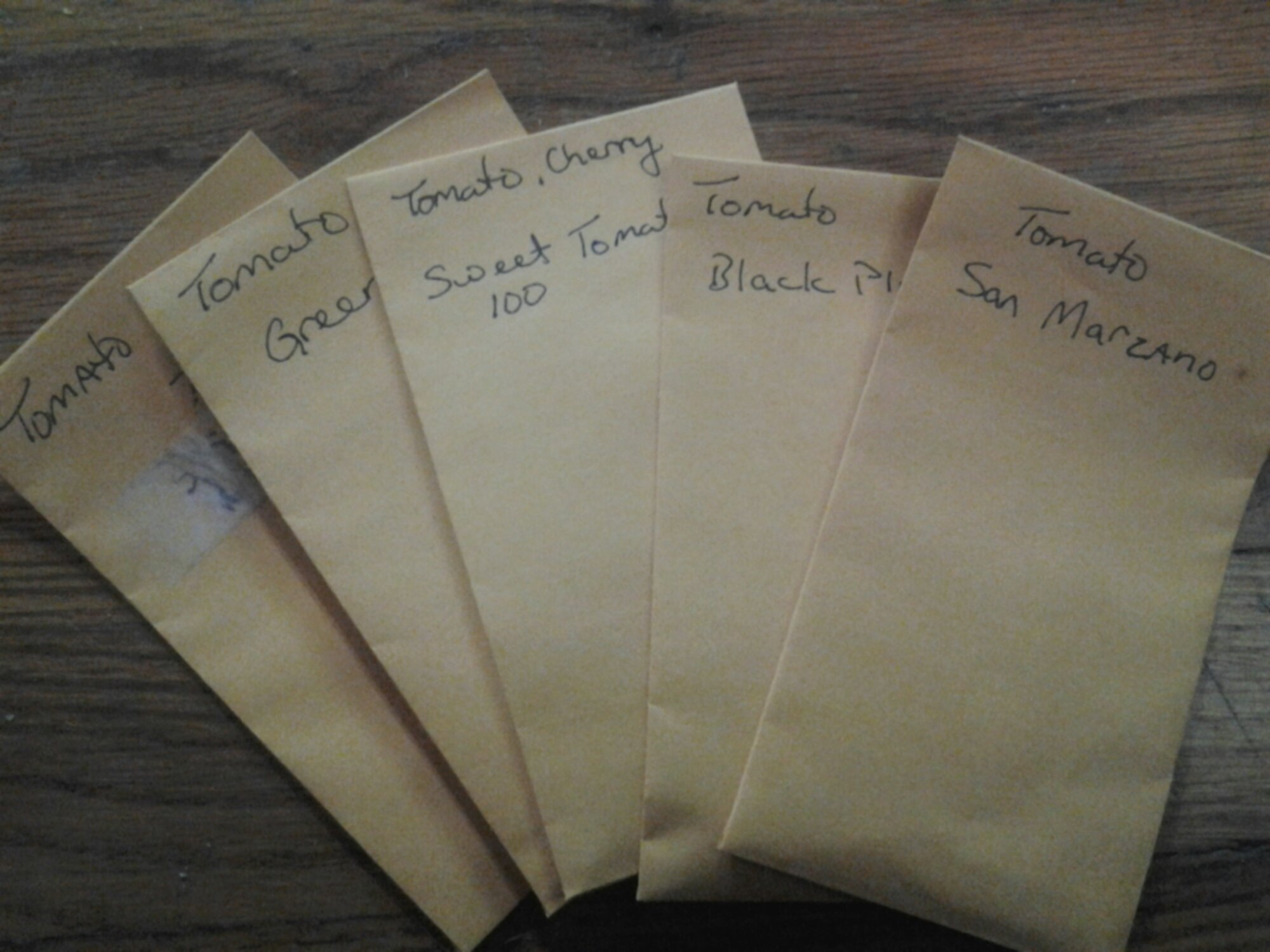 Almost all of my saved seeds were put into those packets.  They work really well, you can even seal them if you want to.  I didn’t for most of the seeds, but I did a few because the seeds kept coming out, like okra.  I tried saving seeds in glass jars, but those are hard to store.  I tried plastic baggies, but like the glass jars, the seeds had a tendency to mold, even if I got them seemingly completely dry.  With these packets the seeds can breathe and I haven’t had any problems with mold, even when I put green nasturtium seeds in the packets.  I got something like 500 packets for $17, more then enough to last several years, though they are plenty sturdy to last several years each.

This year I tried a new labeling method out in the garden, with mixed results: 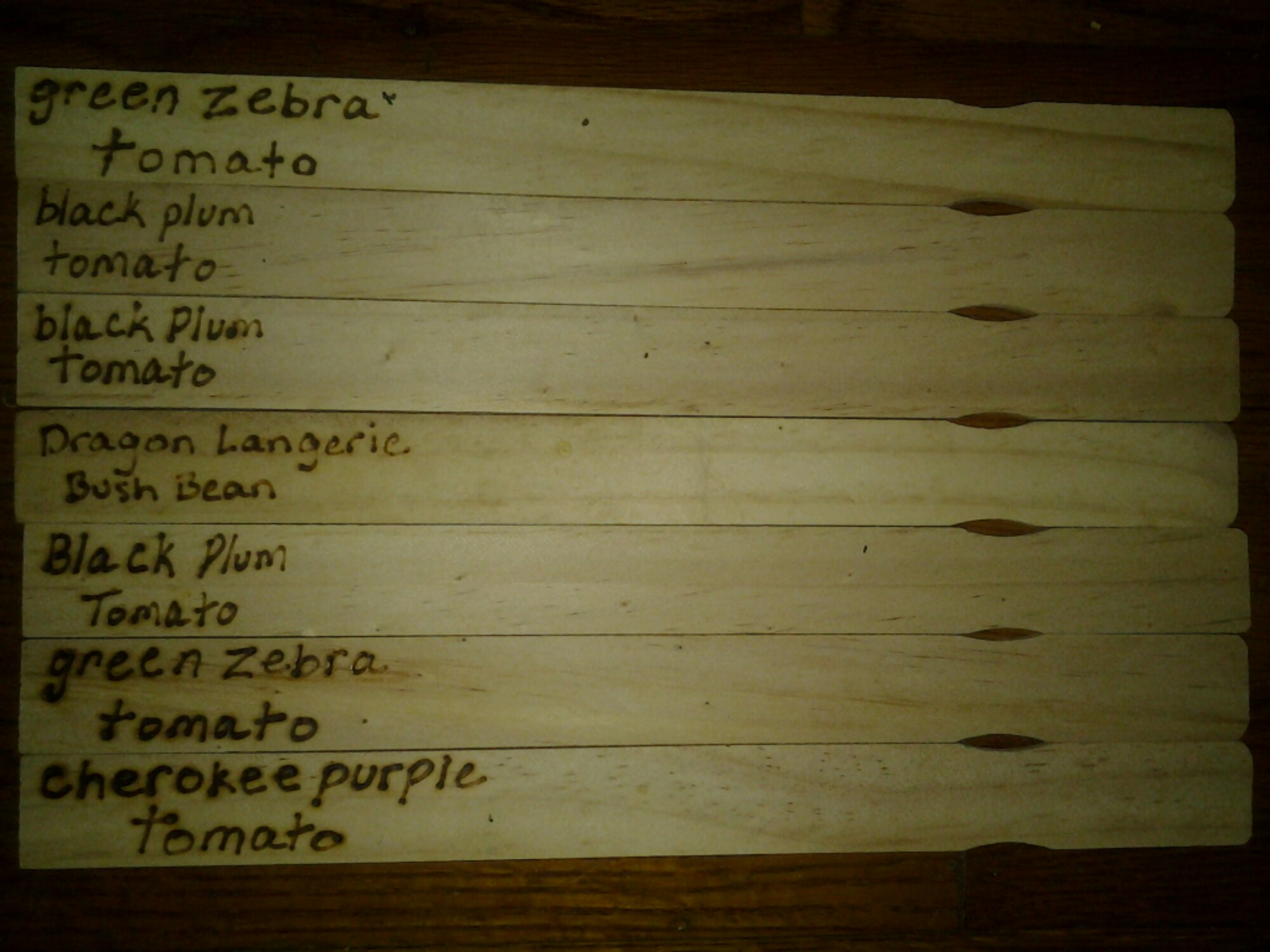 Those are paint stirrer sticks like you get from the hardware store.  I took my wood burner and burned the names of everything I planted.  It went alot faster then I expected, however, when it came time to dig through the 100 or so labels I made it was a real pain in the ass to find what I was looking for.  Quite a few things didn’t get labeled because of it.  The other issue with this method was the fact that the black burned places faded in the sun, completely.   The etching part was still there, but it was really hard to read without the char.  I ended up using black crayons to write on the sticks as I was doing my fall planting this year, that was really awesome.  I just kept a black crayon in my seed box along with some blank sticks and wrote the name of whatever I was planting at the time.  Easy Peasy.  So far the crayon hasn’t faded, though it’s early to tell since the fall sun is so much gentler then the high summer sun.  I will update on the longevity of the crayon next fall, that’s how I plan on marking out my whole garden this year.

The sticks seem to last a season in the dirt of the garden.  The do rot down, however, it’s easy to just break off the rotted part and stick the slightly shorter stick in the dirt.  I’d estimate that you would probably get several years of use out of each stick.  I got mine free from the hardware store….I just asked.  You could use the crayon to mark pretty much anything you would like to use as markers for your plantings.  I’ve thought about doing some really nice markers for my perennial herb plantings using some carved stakes made out of fallen branches.  I will wood burn the name of the plant into an area I’ve carved out, then go over it with crayon so it’s legible for, in theory, several years.  Maybe this winter while I’m stuck inside.