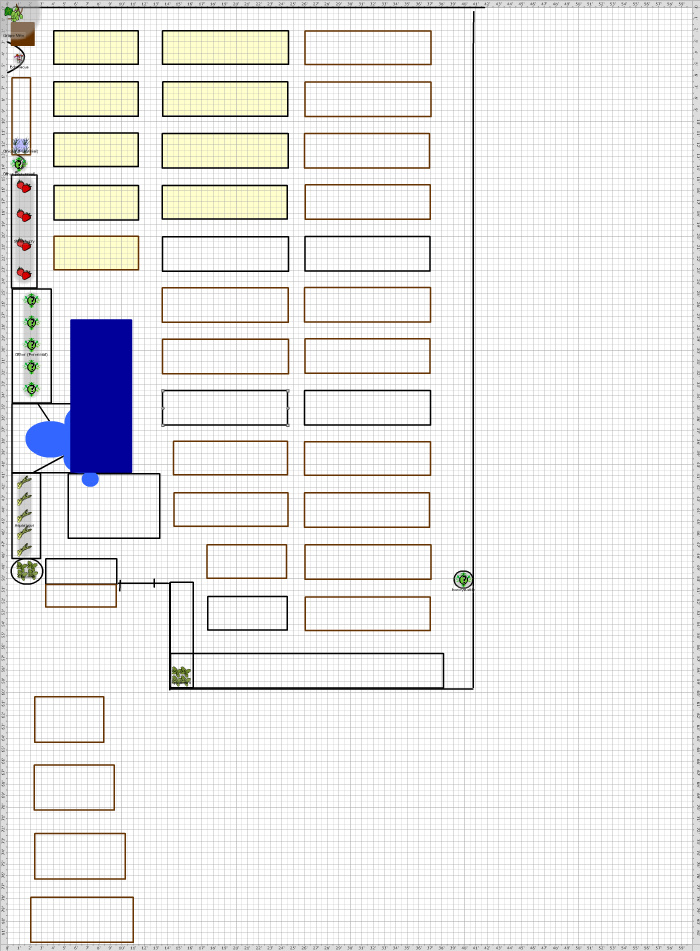 So, this is the plan I made out for the new setup for the garden. I used this program. It was kind of a pain to use, since its all web based and kept freezing up randomly. However, its the best of its kind I’ve seen out there, so I made do. Its nice because if you add in where you planted all your plants, then it will tell you next year where not to plant the same thing. I haven’t gotten a chance to go in and add plants in since I’ve gotten my finalized seed list, but I will be doing that eventually. It will also send you reminders on when to plant out seeds, or start seeds for transplants based on your zone, so that’s pretty cool.

The area inside the “fencing” is in the backyard. The four boxes on the bottom are in the front yard. I just included them on there so I could put in what I planted. Pretty much all measurements are accurate, and I went through and staked out the garden according to the plan I made out.

Eventually all the staked out areas will be wooden beds like so:

However, I only have so much wood so far, and its about used up. My brother made up those boxes for me a couple weekends ago, and I finally had a chance to get them installed inbetween the rain today.

I’m using hay to mulch between the beds to keep down the weeds, as well as keep the soil moist. I am not going to have enough hay to do the whole garden tho, at least not with what I have now. I will be posting an ad on craigslist for more hay, trying to get some wood chips, and paying attention to the ads to see if I can get some more wood. I just love the look of the boxes, looks very tidy. I put up the string so I could tell where the beds and walkways would go, I needed some kind of visual marker.

In between working on the garden, while it was raining, I was productive inside as well. I made some DIY seed tape, these are carrots:

I will be doing more as time allows. Probably more carrots, some lettuce, and maybe some radishes, beets, and turnips. I’m not sure how well these will work out, but its an experiment I’m willing to try. I don’t have enough patience to plant these seeds one by one, as they are super tiny, and usually end up just scattering them out, then thinning. That’s not a bad way to do it, but I’d like to see if this is better.

All in all, I think its been a pretty productive day!